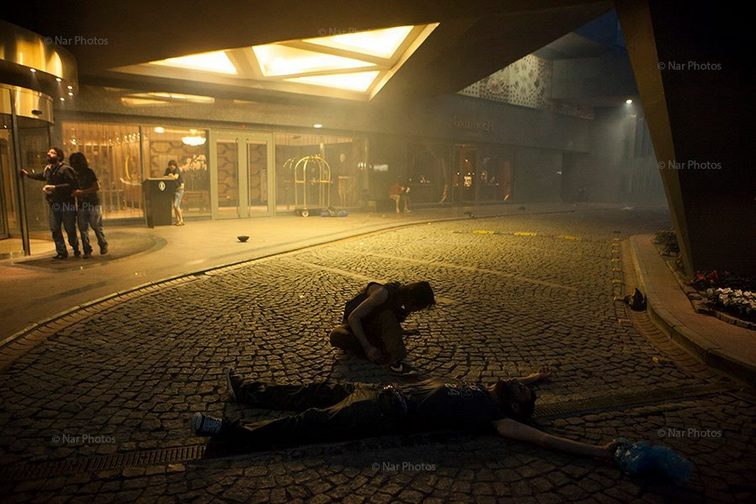 For the past few days, peaceful Turkish citizens have been protesting the demolition of Taksim Gezi Park, one of the few green areas left in the center of Istanbul. The plan by the Erdogan-run AKP government is to build a large shopping center instead, benefitting his own interests and filling his own pockets.

What started with a mere 100 protestors turned into tens of thousands over the course of a few days. People camped out in the park, sang songs, read books, danced. I was there yesterday and it was heartwarming.

Prime Minister Erdogan made a public announcement two days ago stating, ‘We have made up our minds’, and that nothing will stop his plans to destroy the park.

He subsequently ordered his police forces to attack protestors in the park using water cannons and tear gas without warning in the early hours of the morning. This has been happening for the past two days, and continues as I write these words. Tents were burned, innocent citizens were dragged away and people had tear gas sprayed directly into their faces.

Innocent people are being attacked, injured and hospitalized. There are unofficial reports of one person being dead with his ID confiscated by officials (an eerie replay of the May 1 attacks when an innocent young girl was put into a coma due to tear gas attacks. This girl was later labeled by the government as a terrorist)

This has become a matter about more than just saving trees. This is an ‘I can do whatever I damn well want’, fascist mentality that not only supresses but attacks its own people.

To make matters worse, media channels are being censored so as not to display the news.

#direngeziparki is now the 2nd worldwide trending topic on Twitter.

As our friends overseas, we need your help. Send this message to everyone you know. Create awareness internationally about our plight, or matters are going to get much, much worse. We want all international media channels – soclal and mass – to report this news.

Please help us to share this message and stop Erdogan’s ruthless, inhumane acts.

7 years ago in News
Comments